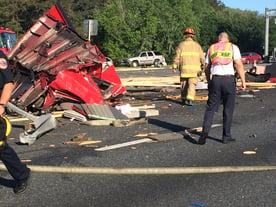 An accident early in the morning on April 18th has caused Gainesville residents to collectively groan much more actively about Mondays this week. The unexpected major accident involving several vehicles stopped traffic on I-75 for much of the day, causing many work attendance delays and, more importantly, several injuries.

At 8:09 a.m. on Monday morning, two vehicles were traveling Southbound on I-75. One of the vehicles, a Toyota Camry, attempted to exit at Newberry Road. As the driver started to exit, traffic in front of the Camry came abruptly slowed, causing the driver to swerve to the left. Unfortunately, this put her in the path of the car following her, a Jeep Cherokee. Their collision caused Jeffrey Lightner, the driver of the 2011 Kenworth semi that had been behind them, to also strike the Camry, and then veer hard to the east. The semi then crashed through the guardrail and overturned,  which caused it to scatter its cargo—a large quantity of lumber—across all southbound lanes of I-75. Lightner’s overturned semi finally came to halt, blocking the inside and center northbound lanes of I-75. 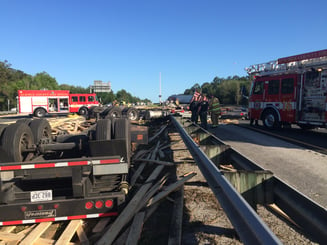 In the meantime, Marvin Walker was traveling North on I-75 in the center lane, driving a 2001 Peterbilt semi; he ploughed into Lightner’s overturned semi as it entered his path, and then jackknifed, blocking all three of I-75’s northbound lanes. Lightner was extricated from his obliterated 18-wheeler by first responders and swiftly transported to UF Shands in critical condition. The Florida Highway Patrol reported that two other people received medical care for non-life threatening injuries at the scene of the accident. 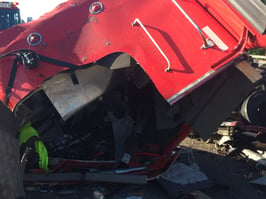 All lanes of I-75 were quickly closed to ensure the swiftest possible cleanup. Not only did the cleanup involve the vehicles in the crash, it also involved safely eradicating the leaked fuel that was pooling on the asphalt and gathering the tons of lumber that had been strewn about the highway. Some lanes were gradually reopened, but all I-75 lanes weren’t cleared until almost 3 p.m. 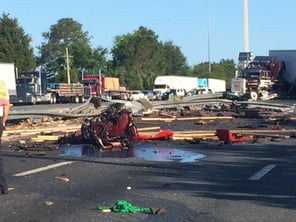 Defensive driving is important in cases like this. Whether you drive a scooter or a semi, everyone is at risk. Nobody wants to go from grumbling about Monday mornings in rush hour traffic to being involved in a 6-car pile up featuring two 18-wheelers.

Steven A. Bagen & Associates understands that disasters may strike at any time. We are available for consultation 24 hours a day, 7 days a week. We have over 30 years of experience helping people when the unexpected occurs in Gainesville and surrounding areas. Contact us today if you or a loved one have been involved in an accident or have suffered a personal injury.