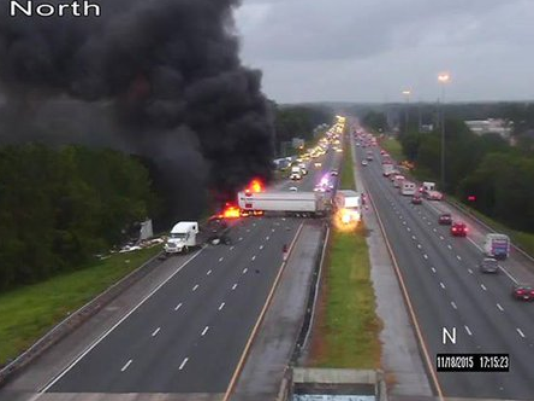 Getting behind the wheel is always a gamble. Even perfect drivers can get seriously injured in an accident through no fault of your own. A recent crash on I-75 in Gainesville demonstrates just how dangerous driving can be, even under safe conditions.

On Wednesday, November 18th at 5:12 PM, two semi tractor-trailers collided on I-75 near Gainesville, causing catastrophic damage to themselves and nearby vehicles. Witnesses saw one truck catch fire and heard explosions. One of the trucks was engulfed in flames, while the other was knocked off the road and into the median.

One truck driver died as a direct result of the accident. Two others were seriously injured and had to be rushed to the University of Florida's nearby Health Shands Hospital, where they were placed on trauma alert. Another driver was treated at the hospital for minor injuries, while others received care at the site of the accident

Authorities have had trouble determining what caused the accident. While there was some light rain that evening. However, it was not heavy enough to seriously impair truck drivers. Police closed off a large section of I-75 while dealing with the damage, thus blocking large numbers of cars from their ordinary route.

The accident demonstrated not only the dangers of driving, but also how valiant ordinary drivers can be. Robert Stone, a flatbed truck driver who narrowly avoided the accident, chose to help victims in the immediate aftermath. Despite the fact that one of the trucks was already smoking, he took equipment from his vehicle and used it to separate two cars, possibly saving the life of one of the drivers inside. He then provided valuable information to police and reporters about the accident.

Besides the physical trauma of the crash, there was also the threat that diesel fuel from the trucks would enter nearby storm drains and pollute the water supply. Ordinary water analysis and purification equipment cannot viably protect municipal water sources from diesel and other oil-based pollutants. Authorities are doing everything in their power to divert fuel from entering the storm drains in the first place.

Whether catastrophic or mundane, automotive accidents can easily result in serious injury. Based in Gainesville, Steven A. Bagen and Associates provides legal support to injured drivers throughout Florida. If you or a loved one has been injured on I-75 or anywhere, please visit our website today.