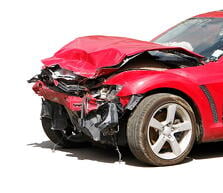 All  too frequently  we  learn  of  deaths  and  injuries  on  I­75  involving careless,  illegal  u­turns  through  the  median.  As  recently  as  May  19, 2014,  several  children  were  severely  injured  on  I­75  near  Ocala, Florida, when a young Florida Highway Patrol officer made a sudden, unexpected u­turn through the median when he was driving north on I­75. Although law enforcement officials have the authority to make a u­-turn  on  the Interstate,  this  tragic  accident  highlights  the  high risk  of performing such  a  maneuver  on  the  interstate. Tragically,  instead of completing the u­turn successfully, the 20 year old FHP Trooper struck a  guard rail  and then  hit the front  of  a  2014 Nissan Altima,  carrying several children ages 3, 5, and 7. The 2014 Altima then hit two  other southbound cars including a 2011 Mercedes, as well as a tractor trailer. Unfortunately, this chain reaction injured three children who had to be life­flighted to Shands Hospital in Gainesville.

Making a sudden u­turn on I­75, often results in tragic consequences. In addition to being illegal under Florida Statute 316.515 and 316.090, u­-turns on  an interstate highway  are extremely dangerous, because of the high  speed  involved  in  the  approaching  traffic.  Generally, all drivers are familiar and comfortable with making an occasional u­turn in local traffic. Making a legal u­turn within city limits, generally can be accomplished successfully, especially because the oncoming traffic is generally approaching at perhaps 25 to 45 MPH. Unfortunately, on the Interstate Highway system, the driver attempting a u­turn through a median  is  facing  approaching  traffic  at  70  to  80  MPH,  or  possibly more,  which  gives  an  extremely  short  window  of  opportunity to complete the u­-turn.

This safety  reminder  is  brought  to  you  by  the  car  accident/personal injury law firm of Steven A. Bagen & Associates. Our firm has been dedicated to "Helping Florida’s Injured" for over thirty years. If we can assist with any traffic incident or personal injury case, we can easily be reached at 1­-800­-800­-2575, or at www.BagenLaw.com.